As a father of three young children I want my kids to be able to eat good quality food, not only now but also in the future. Nevertheless, the risk of decreasing food quality and availability in the near future is eminent. Our current agricultural system is under pressure of being unable to deliver sufficient food in the years to come and it does not always provide the quality that my wife and I desire for our children. Why is this?

Our industrial agricultural system is simply unsustainable. Energy, mainly oil, required to produce agricultural products is used in enormous quantities. Oil to run machines that work the land and power trucks, ships and even airplanes to transport agricultural produce from central production locations to our stores. And also the production of fertilizer and pesticides is extremely oil gobbling. As a result, in order to yield 1 calorie of food we have to spend 10 calories of energy.

Since it is no secret that oil is a finite natural resource out we will need to fundamentally change the way we do agriculture. An energy efficient replacement for this dominant energy source does not yet exist.

Besides the energy challenge, industrial agriculture also creates environmental problems. Large acres of land are used to grow a single type of crop (monoculture) and, in order to compensate for the resulting loss of fertility of the topsoil, farmers are using increasing amounts of fertilizer. Secondly, a monoculture environment is a haven for insects and weeds that are specialized to live from a single type of crop. So farmers must put a lot of effort in keeping pests away from their produce. But farmers have to spray more and more as pests keep on adapting themselves when things change and as a result pests become resistant to pesticides.

There's a war going on

Industrial agriculture can be seen as an oil consuming, constant fight between the farmer and his natural environment. Basically, industrial agriculture is like modern warfare where fertilizer and pesticides are used as the main weapons. A scary thought when we realise that these pesticides are based on the same ingredients as the chemical weapons that were used in the second world war.

In war the military often talk about collateral damage if, e.g. civilians are hurt or even killed during an attack. This is not very different in agricultural warfare as, also we, consumers of agricultural products are exposed to pesticides; sometimes directly from aerial spraying, in case you happen to live nearby farmland or less directly through the chemical runoff from agricultural land which can pollute nearby fields, rivers and ultimately the sea. It is also possible that chemical residues end up in our food which is not very healthy either. So it will be clear that there is a significant amount of collateral damage happening in agricultural warfare.

Where does this bring us? Do we have alternatives? Are we able to feed an increasing global population by doing things differently? If you ask the big corporations you will most likely hear a no. We can only increase yields and ensure continuous productivity within the agricultural system if we rely on technology; i.e. better fertilizers, smarter pesticides and genetically modified crops that are resistant to insects, weeds and also to the pesticides we must use. But, as explained above this is a cat and mouse game; a game that will never end. Undoubtedly this game benefits large corporations which produce high tech agricultural products and can thereby make large profits. But the current way of working is not healthy for us humans, it is not sustainable in the long term and also not ethical, as war is not ethical.

Can we design a food production system that is at peace with its natural environment, including us humans and which is able to provide enough food for an increasing global population? The answer to this question is; yes we can, although for this to be successful we must be willing to adapt our diet as it will involve choosing products that can be produced locally.

We can largely shift from centralized, simple monocultures to localized, complex and diverse agricultural systems. We can end our warfare based, resource hungry, oil dependent agricultural industry and move to a peaceful, low energy, oil independent agriculture environment. With our extensive knowledge and understanding on how nature works we are able to design agricultural systems that require only a little amount of energy, that do not require the use of pesticides and fertilizer and generate yields which are at least three times higher than the traditional agricultural industry can provide. This approach is called Permaculture. 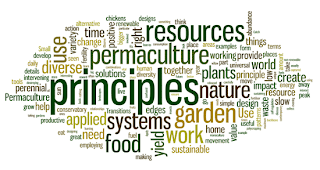 One important benefit of Permaculture is the ability to produce our food locally, exactly there where it is needed. This significantly reduces the need to transport large quantities of food from central parts of the globe over long distances, thereby greatly reducing the amount of energy needed to ultimately get the food on our table. A small price that we have to pay for this is that, alas, we can no longer eat strawberries in winter. Another significant benefit of Permaculture is that it eradicates the need for artificial fertilizers and pesticides.

More and more people start to realize that our dependence on centralized, industrial agriculture and oil is not only unsustainable in the long run, but it also does not provide the quality of food that we, as humans need. As a result an increasing number of people are turning their own gardens into an edible garden or join forces and collaborate to turn a nearby piece of wasteland into a local food production system. A system that not only feeds many but also creates social cohesion and friendships in a neighbourhood which would not have existed otherwise. And this is a non reversible process. Local food production systems will continue to grow. Not only because people understand there is no alternative but also because it is enjoyable and rewarding. So I invite you to stop supporting the agricultural war and start to grow your own food. Either yourselves in your own garden or together with your neighbours on a nearby plot.

This will ultimately allow us to get away from agricultural warfare and move towards a green peace. A green peace where food production is in harmony with its environment, which has a high enough yield to feed all of us and which is sustainable in such a way that it will keep feeding us forever. This makes me feel more confident that also in the future, my children will have access to sufficient and good quality food.